What Does Your Soul Desire?

Should Your Manifesting Goals Include Dates?

What I Didn’t Know about Goals and Desires

A few weeks back I wrote about how fear can be a clue toward figuring out what you really want in life.

With the perspective I have now, I realize that while the advice might be useful, it’s actually a crappy way to go through life, isn’t it? Being guided by fear?

But, based on what your emotional setpoint is, sometimes that’s all you have to work with.

At a recent retreat with my mentor David Neagle and his team, I got to dive really deep into this topic of wants and desires. It started with the goal-setting exercise that they help us do at every retreat. This time they decided to give us more accountability by asking who in the room had met the goals they’d set at the last retreat.

And for those of us who hadn’t (I didn’t come close – I didn’t even remember what my goals were), what had kept us from our goals?

Or as David puts it, “Where did you stop yourself?”

That’s one of his favorite questions, and it’s becoming one of mine too. The question acknowledges that anytime our desires are thwarted, whether by internal or external circumstances, it’s in response to our energy projections. (I wrote about that topic recently too.)

That’s when I realized that I had stopped myself as soon as the goals were set. While I was going through the goal-setting exercise, I already didn’t believe that I was going to meet them.

Sitting with that thought a little longer I realized that I wasn’t trying to set goals – I was trying to predict them. Every time I had ever done any sort of goal-setting exercise, it was from a disempowered perspective that there was a right or wrong goal to set, and if I guessed wrong the goal would not be met.

How ridiculous is that? And imagine how self-defeating and futile, too. But it’s how I was operating. And because I felt like very little power was in my hands, and I didn’t want to face that feeling, I approached goal-setting as a purely intellectual exercise.

(It’s entertaining to see what kinds of goals a person can set when they don’t believe the goals will ever come true anyway. I dream big anyway, but I’m especially great when there’s no reality to limit me.)

But this time was different, because I got to look at where I was stopping myself. And as soon as you bring awareness to something, it starts to change.

At first the awareness was debilitating. Have you ever had that experience when the thing you need to let go of bubbles up right there under the surface, and you feel like you need to run from the room and just be alone for a moment? I tried to continue with the exercise but finally I couldn’t take it and actually did leave the conference room to sit out in the hall.

Out in the hall I sat on a sofa and started to write in stream-of-consciousness, determined to get to the root of why I sucked at meeting goals. Determined to find out what it would take to motivate myself to stick with them once I created them. One of the coaches from David’s team found me out there, and after talking for a bit we found the answer:

But even though I’ve written about that very thing a half dozen times, I guess I didn’t really believe it until I reached that moment on the sofa.

And then my Higher Self gave me these words: 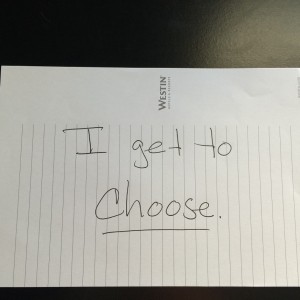 That’s what a goal is: We get to choose what we want to have happen and then follow through to making it happen.

(Maybe you knew that – obviously my wires had gotten crossed about it.)

Goals aren’t separate from desires. They are the steps that bring us to our desires.

We get to take those dreams we’re always talking about and bring them into physical reality. We really do get to place our order with the “magical genie of the Universe,” as they showed in “The Secret.”

And then as long as we become and remain one of the contributing components to the outcome, it will manifest.

We get to choose.

I get to choose.

You get to choose.

So what do you choose?

Christina Ammerman is a Master Spiritual Healer, a Divine Truth-teller, and a peacemaker. Her soul purpose is to offer Divine Love, healing, and guidance to anyone who seeks alignment with their Divine Self.