Unlocking the Door to Your Success

Lately I’ve made some significant positive changes in my life. The biggest one so far has been going gluten-free. It’s an experience that I want to learn and teach from because honestly, sometimes I pinch myself over this success.

Me being gluten-free is a pretty big deal, considering that I was an emotional eating carb junkie who depended on baked goods to alter my brain chemicals.

Last night I was contemplating my GF journey, how long it has taken, and why it has succeeded. It’s not like I woke up one more and said, “I’m going gluten-free today.”

My journey to gluten-free

It started at least a year ago – maybe two – when I first heard Doreen Virtue talk about how gluten “is like glue that blocks your intuition.” The first time I heard her say that, I decided she must be wrong. I didn’t have a reason to justify that determination; it just was.

A few months later I heard her say the same thing again. This time it didn’t seem to absolutely wrong, but it did sound pretty difficult.

More months passed. I took a four-week online course with Doreen call “The Divine Diet,” and there she was again talking about gluten and dairy and how they coat the inside of our bodies and act like glue.

By now I’d let down my resistance enough that I could feel a nudge from my guidance. “OK, I’ll give it a try,” I told myself. And I did: For eight days, I ate absolutely no bread or wheat products. I even went out to Sweetwater Tavern, a local area restaurant that brews their own beer and serves the most amazing basket of bread with the meal.

(They have these little fried doughnut ball thingies…I don’t know why there’s anything else in the basket…but I digress.)

I made it through that Sweetwater meal with no temptations at all…and all the way through eight days of being wheat-free.

On day nine I cracked. For no reason at all, I binged on every bread product in the house and went out to the store to buy more. That was last August.

Fast forward five months to today, and I am successfully, happily gluten-free.

What worked this time?

I ask myself why now is different. How have I been able to maintain something for two months that I couldn’t handle for more than eight days? And why am I so sure that this time is going to last?

The answer is that in the meantime, I worked through my resistance – all the inner emotional issues that kept me from wanting to succeed before.

Notice that I said “wanting to.” Yeah, that’s right – because as much as my intellect was saying “Let’s go gluten-free,” there were other components of my subconscious self that weren’t on board yet. The resistant part of me, who at first insisted that Doreen Virtue must be wrong, couldn’t have simply vanished overnight. She had to slowly shrink and be put in her place until she was outshone by my desire to accomplish this goal.

Think of resistance as a locked door that stands between you and your goal. When you first jiggle the knob, you find that the door is locked and you don’t have the key. And there is no way you can successfully get through the door without the key to unlocking your resistance.

When you’re faced with a door that stands in your way, there are a couple things you can do:

Option #2 is pretty popular, especially in this “thoughts are things” world where we’re taught that if we want something hard enough, we’ll find a way. Any act of quitting something “cold turkey” is #2. Most diets are also #2.

Here’s the problem with option #2: If you use nothing but sheer intellectual will to knock down the door, it won’t stay down. Doors of resistance are like crazy cartoon doors that have springs under them and bounce right back up.

Or like video game zombie doors, that you can’t just shoot down – you have to totally obliterate them or they’ll rise up again.

It turns out that option #3 is the best way to get through your resistance. That’s how it happened for me with my goal to eliminate gluten: It took me three times of facing the idea to be mentally and emotionally ready, including the third time when I tried the brute-force method of breaking through only to have my resistance spring back up eight days later.

Sometimes the true key to unlocking your success is to wait. If you have to rationalize yourself into reaching for your goal, don’t do it; you might succeed, but it will be through a path of extreme effort instead of ease. Wait until you’ve had time to get ready, and so has the world around you. Wait until moving forward feels like you’re flowing gently down a river in a canoe, not fiercely padding upstream.

While you’re waiting, the strong intention that you’ve created goes to work. Your first, unsuccessful jiggle of the doorknob created your intention to find the key, which was sent out to the Universe. In the time since you walked away from the door, your intention has been powerfully drawing the key toward you.

The key, that is, to releasing the mindset and emotional blocks that make up your resistance.

Ever since you first set that intention to unlock the door, your experiences have given you opportunities to shift your thinking and release emotional blocks that keep you from unlocking the door.

In my case, the biggest opportunity came from a food behavior coach. When we had our get acquainted call, I had decided I was going to say yes to her before I got on the phone, because I had also paid attention to all the little signals, synchronicities, intuitive feelings that led me to her. 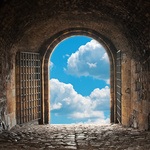 It may be that by the second time you approach the door, you’ve had enough shifts that now your resistance is gone. You’ll find out when you step up to the door and jiggle the knob again: Either you’ll be ready and step through to your goal with ease, or you’ll hit resistance again and the door will still be locked.

In my case, that second jiggle of the doorknob came right after I followed my coach’s recommendation to see a naturopath, who confirmed my gluten sensitivity. She gave me a whole list of foods – not just gluten – that my body doesn’t tolerate well. In contrast to eliminating my favorite foods like chocolate, sugar, and cheese, removing a little thing called gluten suddenly didn’t seem that bad.

Over the weekend I allowed myself a mourning period, and on Monday I stepped boldly through the door and into my commitment to be gluten-free.

Sometimes it feels like you’ve set the same goal a million times and still met the same locked door of resistance each time. It can feel like you’re never going to find the key and reach your goal.

(Any perpetual diet-starters out there? You know what I mean, and I know your frustration.)

The thing to know is that as long as you don’t let yourself get defeated – as long as you hold fast to your intention to get that door unlocked – you’ll still be attracting everything you need in order to find the key. All the knowledge, teachers, and experiences are still making their way to you. Be patient, be open to opportunities to release your resistance (even if you don’t know what it is), and your door will eventually open.

What personal goal seems to stay just beyond your reach? How would you describe the door that stands between you and that goal? And how would your life be better if you could unlock that door of resistance and reach your goal?

3 Ways That Time Management Improves Your Relationship with the Universe

How Impatience is Stealing Your Personal Power

In Praise of All That You Are

If It Comes From the Clouds, Don’t Ignore It