If nothing else, after the rocky road of 2013, this year is already bringing a sense of relief that’s putting a smile on many faces. (I’ve seen them.)

Why is that? Because of the amount of Light that has been downloaded to the planet over the past few years. Because of the number of people who are seeking and living in conscious connection to that Light. Because Light = Love, and when we live in Love, we vibrate closer to God and the Angels – and when we vibrate closer to them, it’s easier for us to invoke their support.

What’s been happening is that you’re receiving more messages from your Angels than you used to. To be clear, they were sending messages all the time; you’re a clearer receiver now. You don’t shake off the seeds of thought that they’ve been planting to help you release the negative emotion of a situation. You’re able to feel a feeling and then let it go. They’ve been helping you with that.

Now they say, “Keep going. Make it intentional! And let us help.” They want you to lean on them more. They want to help you remember to call on them so that they don’t have to rely on sneaking messages into your awareness when you need them.

This message came through in a powerful way during a recent session of Integrated Energy Therapy with one of my Healing Mastery Program students. She had been intent on releasing physical weight from her body, but as we discovered, secretly afraid that she would sabotage herself. We focused the IET session on removing any energetic blocks of fear, self-doubt, or anything else that would trigger self-sabotage.

During the session the Healing Angels asked me to give her this message:

“You are no longer the person that you used to be. In the previous times that you tried to do this, it was as if you were alone, because you weren’t vibrating high enough to hear us and receive our support. Now you are different. You know that we are here, you know how to communicate with us, and you are vibrating high enough to easily hear us. This time you will succeed.” 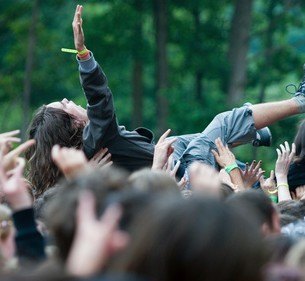 And then came the part I loved best: The Angels communicated an image of someone crowd-surfing at a concert. Dozens of hands reaching up to support one person, who was being carried from Point A to Point B with none of his own effort. “This,” the Angels said to her (and say to you now), “is how it can be. Let us carry you. Trust in us to support you.”

Have you ever crowd-surfed? Not me – I like the ground just fine. But I can imagine the level of trust that it takes to let the crowd support and carry you. You have to let go of any fear about being dropped, otherwise I’m sure it becomes a self-fulfilling prophecy. Some people are fearless and jump right in; the rest of us would have to consciously work on letting those fears go.

That’s how it is with invoking the Angels: Sometimes you can do it instantly and fearlessly; other times you have to work up to it.

How I put my trust in the Angels

Recently, for me, it’s meant having conversations with my Angels that sound something like this: “OK, guys, this is a leap of faith I’m taking here. I’m counting on you to make this happen and to help me keep myself out of the way.”

And then I take a deep breath and let it out. And then I scan my body for any signs of tension. If I find some, then I know that I haven’t fully let go, so I feel into those places and/or send in some IET energy until the tension dissolves. (After years of practice, this all takes me about 30 seconds.)

And then I go on to the next thing in my day.

So when I have these conversation with my Angels, do they come through for me? Probably, but the truth is that I can’t say for certain.

I know, that’s a weird thing to say, right? Wouldn’t I care whether I’ve gotten what I asked for?

Here’s the thing: In order to truly give over your outcomes to your Angels, you also have to surrender your fears, doubts, and attachments to those outcomes, just as I described that I do. 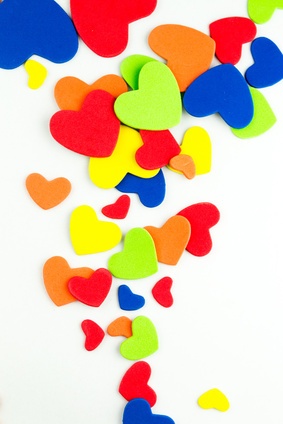 Getting what you desire may certainly be a path to happiness – but a funny thing happens when you put your Angels to work on getting that thing and then get yourself out of the way: The moment that you truly surrender your outcome to greater forces, you have found the shortcut to happiness.

The moment when you let go of fear, doubt, worry, and attachment – which is absolutely necessary for the Angels to do their work for you – all that’s left is…you got it – happiness!

Meanwhile, yes – the Angels will come through for you as it serves your highest good. It may be in the way that you hoped, or it may be something better.

But you won’t care, because you’ll already be happy.

3 Reasons Why Your Angels Want You to Have Money

How to Open Yourself to Receiving Abundance

Want More Intuition? Give It a Path to Follow

Why I Practice Integrated Energy Therapy