The Missing Piece to Manifesting

The Real Meaning of Gandhi’s “Be the Change”

Love and Light in the Time of Coronavirus

Set It and Forget It: The Elusive Principle of Manifestation

Certainly you’ve seen the infomercial for the Showtime Rotisserie Oven, where Ronco® inventor Ron Popeil and his beautiful blond companion expound the virtues of this revolutionary countertop masterpiece. This oven produces fully-cooked roast chickens that are succulent, tender, and tasty.

And it’s not just for chicken – you can cook beef roasts, pork ribs, and other meats too!

People claim to have lost 20, 25, even 30 pounds after buying their Showtime Rotisserie Oven.

But what’s the most compelling feature of the Showtime Rotisserie Oven? Say it with me now: “SET IT AND FORGET IT™!”

Why it’s so appealing

Those words speak to something deep in the core of each human being. I’ve heard plenty of people use that phrase for things that have nothing to do with rotisserie ovens, including this idea that I’m talking about today with manifestation.

As busy people we love the idea of work being done without our conscious attention to it. Who has time to stand at a stove and cook when there’s so much else that calls for our attention? This marvelous invention takes care of one thing on our to-do list for us.

At the same time, I suspect that this idea speaks to something deeper in the core of every human being. In our core we know that this is how the Universe works: Identify what you want (“set it”) and then leave the details up to the Spiritual Laws and those ethereal beings who orchestrate them (“forget it”).

In our core we know this so well that I have actually heard other people use the phrase “set it and forget it” when describing manifestation. One of my clients said it the other day during her session, after I’d already started working on this article.

Stories of this principle in action

Certainly you’ve heard stories of this principle in action. Remember John Assaraf’s story about his house during the movie “The Secret”? He talked about putting a picture of his dream house on a vision board, which got packed away and forgotten. Years later John discovered that he was living in the very house that was in the picture. Not a similar one but the exact house!

I’ve had some great examples of this in my own life too, even if on a smaller scale. Last year I won a contest that had me very excited when I entered but then I completely forgot about. The prize was two tickets to a lecture by Dr. Robert Ballard, who discovered the shipwreck of the Titanic, on the 100-year anniversary of the sinking. My excitement came from knowing how much my husband Brian, who was fascinated with the real-life story of the Titanic, would enjoy the event; the effortless manifestation came from forgetting about it.

When we forget about something we’ve asked for, we don’t have doubts that would produce the negating energy to cancel the request.

This is not just for masters

Right now you might be thinking, “That’s great for you and John Assaraf, but you’ve been working with this stuff for a long time and know how to do it. How do I get the Universe to line up for me that way?”

One funny thing about that thought is how it suggests that forgetting is the skill of a master. Doesn’t that seem counter-intuitive? But of course, what we call “forgetting” is what a master would call “letting go.” Whether we let go intentionally or because we get distracted, the net effect is the same.

One way to look at it is, the Universe will deliver to you whatever matches your thought – but in order for the Universe to respond to the thought, you have to actually let go of the thought so that the Universe can work with it.

Sometimes vision boards and intention lists backfire because every time we see them, they remind us that we haven’t yet gotten

Here’s one more story that not only illustrates this idea but features someone who is not a spiritual master. (Well, not in any officially recognized sense. He is a great spiritual teacher for me, however.)

This story belongs to my husband Brian, who is very supportive of my work but not a believer in much of it. While the story starts with something I did, mine is at best a supporting role – it’s all about Brian:

Last Wednesday morning I posted this to the Zenquility page on Facebook:

After seeing the first few replies, the rest of my day kept me too busy to read the rest. I stepped out of this story until dinnertime, but plenty happened while I was gone. When I did pull up Facebook again around 7:30 PM, here’s what I saw: 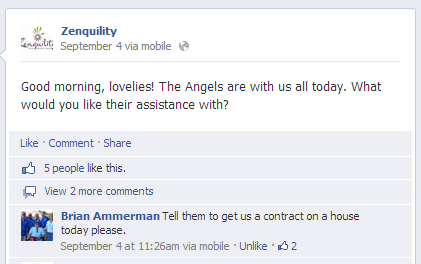 Here’s the WOW! moment of the story: One of the things keeping me busy that day was this text that came from our real estate agent three hours after Brian posted his comment:

Remember that I had no clue about Brian’s post when I got this text; I didn’t see it until five hours later. What I know now is that Brian’s day was definitely as busy as mine, because he didn’t reply to this exciting news until 4 PM.

Clearly Brian’s putting his full attention on his work allowed the contract to be manifested. He put out his request and then stepped away, permitting the angels (whom he may or may not have believed he was truly invoking) to do their stuff.

When you can’t forget

It’s one thing to “luck into” a manifestation because you forgot you’d asked for it. You can even intentionally create this phenomenon by using a gratitude box or blessing bowl, where you write what you want to manifest on slips of paper and then never look at them again.

But let’s face it – that’s not the reality for the things that you really, really want. I’d be doing you a disservice if I ended the article here, suggesting that letting go is always possible and easy. Sometimes you can’t forget the lack that you feel most powerfully. Unfortunately those feelings keep you so entangled in the energy of your intention that it never gets far enough away from you for the Universe to respond to it.

So let me leave you with one last thought of what you can do instead: Create “forgetting words.” Have a “letting go” mantra to use anytime you need help letting an intention go out into the Universe.

You can borrow my mantra is “I’m glad that’s being taken care of.” Say that to yourself whenever you catch yourself obsessing over details that you can’t control. Literally cut yourself off in mid-thought: “I’m glad those details are being handled by someone smarter than me.”

Repeat the words until you can feel the tension release from your belly.

And then go back to doing something else.

Do you have a “letting go” mantra?

What’s the best thing you’ve ever manifested by forgetting?

And what would you like to manifest now? Think of something you can easily forget about, write it in the comments below and then let it go.

“Set It and Forget It” is the trademarked property of Ronco.

Christina Ammerman is a Master Spiritual Healer, a Divine Truth-teller, and a peacemaker. Her soul purpose is to offer Divine Love, healing, and guidance to anyone who seeks alignment with their Divine Self.